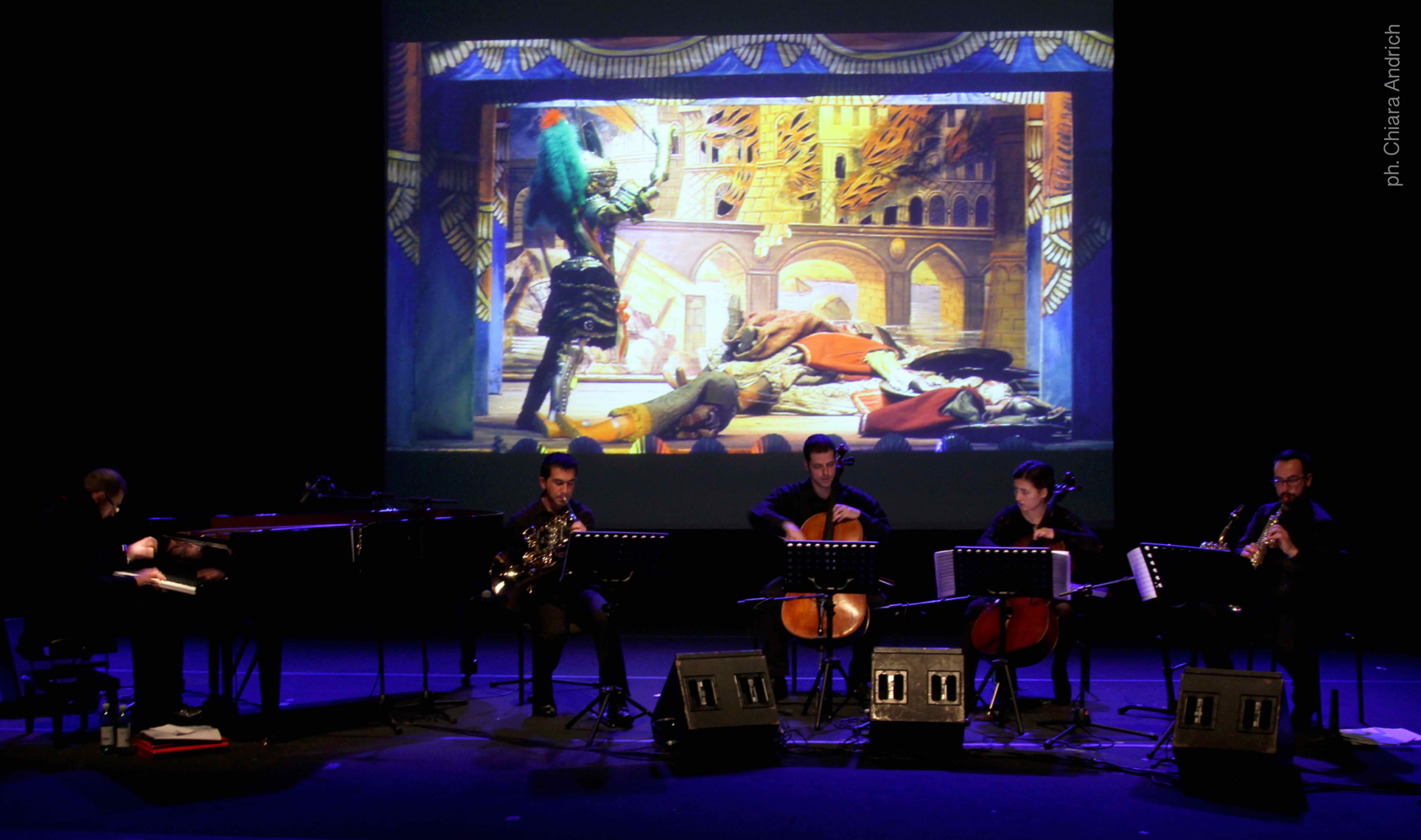 My Quaderno di Danze e Battaglie dell’Opera dei Pupi [Notebook of Dances and Battles for the Sicilian Puppet Theater] is a homage to the work of Sicilian puppeteers and their creatures, evoked through sound-signals, enchantments and hints which emerge from both the harmonies and rhythms of the music. The Ouverture – as is typical of the form – introduces the action and and themes of chivalric exploits developed in the subsequent pieces.
Arditi e Trame [Bold Deeds and Plots] is a musical representation of the ‘review’ of the French Paladins, the traditional parade of Charlemagne’s knights, followed by noble ladies and squires …
until the sound of the ‘battle trumpet’ announces the assault of an enemy army and the consequent preparation for Battaglia [Battle], initially marked by 7/8 time and evoking the off-stage stomping of the puppeteers’ feet that rhythmically shapes the duels and other fighting, while the following 3/4 time that concludes the piece is the same as the traditional pulse of the battlefield.
A calm somewhere between tension and withdrawl characterizes the next piece, Pene d’amore perdute [Love’s Labor’s Lost], suspended between the delicacies of courtly love and the severity of the ethical paradigms which define relations among the French Paladins.
The final piece introduces the listener to the Fabbrica degli Incantesimi [Enchantment Factory] in which the ‘fantastic’ elements of Sicilian puppet theater – powerful wizards, masters of enchantments and spells – take form.
The Paladins and puppeteers of my sound-theater are the extraordinary musicians of the Giacomo Cuticchio Ensemble: Nicola Mogavero who alternates between the agility of the soprano saxophone and the soft cottony depths of the baritone sax; Mauro Vivona’s brassy warrior-horn; and the cellos of Alessio Pianelli e Francesco Biscari, a continual dialectic between solo display and orchestral color. My piano contributes to the spectacle just as the antique player-piano had – the same instrument that I played as a child in the course of my apprenticeship as a puppeteer – providing the musical accompaniment for performances of the Sicilian pupppet theater.
The Rapsodia Fantastica [Fantastic Rhapsody] that closes the program, interpreted by Chiara Andrich with her fitting and affectionate video images, is a freely articulated composition in which I leave the work, rhythms and atmosphere of this family theater to speak for themselves.
Giacomo Cuticchio
+ Google Calendar+ iCal Export